My heart broke recently as I watched pastor Ron Carpenter pour out his heart in his weekend message to his congregation. It was a gut wrenching experience as he shared with his church the devastating pain his family has endured over the past ten years, and the incredibly difficult future they now face. I have never met Ron, but my heart and prayers go out to him. I can’t imagine the anguish of sharing the most awful parts of your private life with 100s of friends and 1000s of strangers. This is a time when we put aside theological differences and preconceptions and pray for a man and a family wrecked by the effects of evil.

Seeing Ron expose his heart and soul to his congregation reminds me of several hard-earned lessons from a lifetime of ministry. These lessons are not about Ron Carpenter or Redemption World Outreach Center, I don’t know anything about Ron, his leadership or the structure of his church; these are the lessons of 31 years of vocational ministry. Lessons learned growing up a third generation pastor’s kid, watching 30 members of my extended family in active ministry, and interacting with hundreds of pastors and leaders across the country. I’ve organized these lessons into four “Y”s of healthy ministry.

Integrity: being complete or undivided.

While all pastors stress the importance of integrity, there is a temptation in ministry to create an onstage image different from who they really are. Very few  set out to be two different people, it just happens. This is an incredibly dangerous road to go down.

I’ve seen a couple of iterations of this tendency to project an idealized leader for public consumption. In one version the leader creates a more polished image of himself. He is incredibly happy, has a well-adjusted family, and lives a super desirable lifestyle. He faces challenges and temptations, but he always overcomes in the end. The implied message is that if his followers will emulate his faith they too can live a charmed life. Social media has made this temptation into an art. The leader tweets about his “smokin’ hot wife”, his incredible kids and the constant spiritual breakthroughs he achieves. He creates a life everyone wishes they had. In reality its a life he wishes he had as well.

In the second version the leader creates a more raw version of himself. He talks about a crisis of faith he never really had. He embellishes college stories to better match those of his congregation. He exaggerates family challenges to sound more like the real life stuff his followers deal with every day. This version of the leader requires that he hide a relatively innocent youth as well as the luxuries ministry success has afforded him. He must feign humility even when he doesn’t feel humble. The message to the church is, “You can follow me because I’m just like you.”

Authentic ministry requires one version of you. You may be a little more refined in public, hopefully you don’t scratch and spit as much, but people who know you should be able to say you’re the same guy on stage as you are at the ballgame. The real you will eventually come out, so you might as well be you from the beginning.

2. Transparency: I am human

Transparency: Able to be seen through

Integrity says what you see is what you get while transparency says what you see is a normal human being. Transparent, human leaders get tired, discouraged and frustrated. They’re not always sure where to go or what to do next. They don’t have a fairy tale marriages and their kids sometimes (all the time) exasperate them. They worry about their finances, and their health and how they’re going to care for their parents when the time comes. They have been called into a position of public ministry, but they’re just an ordinary humans.

The image of a leader with the perfect hair, the perfect spouse and the perfect children isn’t realistic, sustainable or biblical. Elijah got tired, Peter got hungry, Paul got ticked off at his best friend. There isn’t a single example in the Bible of a leader who didn’t struggle with his humanity. Being transparent about our humanity means admitting we sometimes struggle in our marriage, feel clueless as parents and wrestle balancing our faith with our doubt. Transparency says the human condition is universal; I’m no exception.

3. Vulnerability: I am broken

Vulnerable: Capable of being wounded our hurt

We are creating a version of Christianity that says the true believer, if they follow the right plan or practice the right disciplines, will inch closer and closer to spiritual perfection. The goal is to be a mature believer who almost never sins, and if he does it just little things like forgetting to leave a tip or sighing out loud in line at Wal-Mart. Leading the parade is the pastor who proclaims he has overcome the sin he used to struggle with, and is now nearing heavenly nirvana. He might have been saved by grace, but he has worked his way to true holiness. Won’t you follow in his footsteps?

This in spite of all the biblical evidence to the contrary. David seduces Bathsheba and murders Uriah long after writing the 23rd Psalm. Peter succumbs to hypocrisy, refusing to eat with Gentiles, years after leading Cornelius to faith. Paul, the greatest evangelist the world has seen,  writes in Romans 7

I love God’s law with all my heart. But there is another power within me that is at war with my mind. This power makes me a slave to the sin that is still within me.

The healthy leader says with integrity that there is only one version of me, with transparency that I am only human and with vulnerability that I have broken parts in my life. I am growing spiritually, but like  you, I struggle with sin every day.

4. Accountability: I am under authority

I have not seen a leader fail or crumble who has a small circle of friends to whom he is accountable. Friends who know his family, his background, his sins and his failures. Friends who call him out on his stuff and have permission to remove him from his position of leadership if necessary. This only works if the leader is honest with his circle. If he isn’s real, transparent and vulnerable with this group they are of little value. If, however, this is a group of peers he trusts with his life they will likely catch him before his world comes crashing down.

A danger here is the illusion of accountability. A pastor will point to a board of overseers, deacons or elders; or he might say denominational oversight provides this safeguard. Normally, however, the accountability at this level is surface. The pastor rarely shares his intimate challenges and sins with an appointed board. They have the power to discipline or remove, but they don’t live in the daily details. Board accountability is like floodgates on a dam; it is the last line of defense. True accountability happens in a smaller circle at a deeper level.

A final note on living out the Four “Y”s; everything is not appropriate to share at every level. It is as unhealthy to dump your garbage on your neighbor’s lawn as it is to hide it in your basement. While a healthy leader has integrity, transparency, vulnerability and accountability at every level, he also understands what should be revealed at every level of leadership. Below is a pyramid that illustrates this concept: 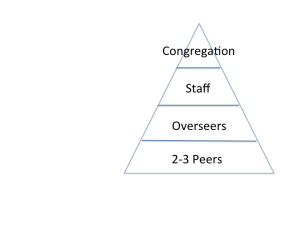 The leader’s small circle of friends have open access to his life. Nothing is off limits. They also help him determine what is appropriate to share at the other levels. The overseers have access to the general outline, but not necessarily the details. The staff has a clear picture of the leader’s life without information that could hurt or embarrass others. (i.e. the staff leadership team would know the pastor is struggling at home, but doesn’t need to know the specific challenge). The congregation knows enough to understand the overall picture of the pastor’s life. If a pastor has been real with the congregation and his son is arrested for drugs the attenders won’t be shocked. They know the pastor has been struggling with a family issue, they just didn’t know which family member or the specific issue.

This post is not aimed at any pastor nor is it not a blueprint for growing a church. You might be able to lead a church by projecting an image that isn’t true to you or the life you live. You might convince people to follow an illusion. I’m sure there are successful (and unsuccessful) pastors who are able to make this work. But the illusion will crumble and the facade will fail and you will be left naked and ashamed.

This is a guide for healthy ministry that reminds people that your role, your only role, is to point followers to Jesus.

Geoff lives in Denver, Colorado with his wife Sherry (CEO of MOPS International). Geoff and Sherry have two awesome kids (Mike and Brittainy), a wonderful daughter-in-law (Hilary) and the most beautiful granddaughter on earth (Maggie Claire) Geoff has served on staff at Seacoast Church and Saddleback Church. He is now the Director of Exponential and a freelance Church Catalyst and Encourager.