In 1748, the British politician and aristocrat John Montagu, the 4th Earl of Sandwich used a lot of his free time for playing cards. One of the problems he had was that he greatly enjoyed eating a snack, whilst still keeping one hand free for the cards. 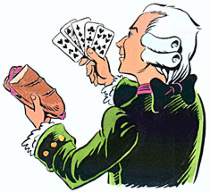 So he came up with the idea to eat beef between slices of toast, which would allow him to finally eat and play cards at the same time. Eating his newly invented “sandwich”, the name for 2 slices of bread with meat in between, became one of the most popular meal inventions in the western world.

What’s interesting about this, is that you are very likely to never forget the story of who invented the sandwich ever again. Or at least, much less likely to do so, if it would have been presented to us in bullet points or other purely information based form.

For over 27,000 years, since the first cave paintings were discovered, telling stories has been one of our most fundamental communication methods. Since recently a good friend of mine, gave me an introduction to the power of storytelling, I wanted to learn more.

Here is the science around storytelling and how we can use it to make better decisions every day:

Our brain on stories: How our brains become more active when we tell stories

We all enjoy a good story, whether it’s a novel, a movie or simply something one of our friends is explaining to us that they’ve experienced. But why do we feel so much more engaged when we hear a narrative about events?

It’s in fact quite simple. If we listen to a powerpoint presentation with boring bullet points, a certain part in the brain gets activated. Scientists call this Broca’s area and Wernicke’s area. Overall, it hits our language processing parts in the brain, where we decode words into meaning. And that’s it, nothing else happens.

When we are being told a story though, things change dramatically found researchers in Spain. Not only are the language processing parts in our brain activated, but any other area in our brain, that we would use when experiencing the events of the story are too.

If someone tells us about how delicious certain foods were, our sensory cortex lights up, if it’s about motion, our motor cortex gets active:

“Metaphors like “The singer had a velvet voice” and “He had leathery hands” roused the sensory cortex. […] Then, the brains of participants were scanned as they read sentences like “John grasped the object” and “Pablo kicked the ball.” The scans revealed activity in the motor cortex, which coordinates the body’s movements.”

A story can put your whole brain to work. And yet, it gets better:

When we tell stories to others that have really helped us shape our thinking and way of life, we can have the same effect on them too. The brains of the person telling a story and listening to it, can synchronize, says Uri Hasson from Princeton:

“When the woman spoke English, the volunteers understood her story, and their brains synchronized.  When she had activity in her insula, an emotional brain region, the listeners did too.  When her frontal cortex lit up, so did theirs. By simply telling a story, the woman could plant ideas, thoughts and emotions into the listeners’ brains.”

Anything you’ve experienced, you can get others to experience the same. Or at least, get their brain areas that you’ve activated that way, active too: 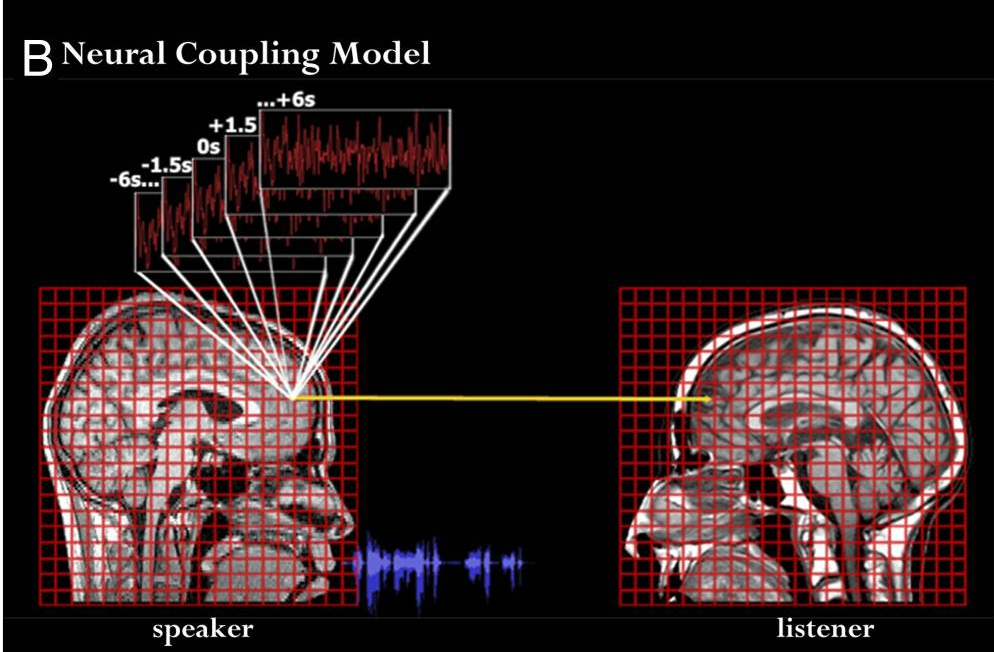 Now all this is interesting. We know that we can activate our brains better if we listen to stories. The still unanswered question is: Why is that? Why does the format of a story, where events unfold one after the other have such a profound impact on our learning?

The simple answer is this: We are wired that way. A story, if broken down into the simplest form is a connection of cause and effect. And that is exactly how we think.

We think in narratives all day long, no matter if it is about buying groceries, whether we think about work or our spouse at home. We make up (short) stories in our heads for every action and conversation. In fact, Jeremy Hsu found:

“Personal stories and gossip make up 65% of our conversations.”

Now, whenever we hear a story, we want to relate it to one of our existing experiences. That’s why metaphors work so well with us. Whilst we are busy searching for a similar experience in our brains, we activate a part called insula, which helps us relate to that same experience of pain, joy, disgust or else. 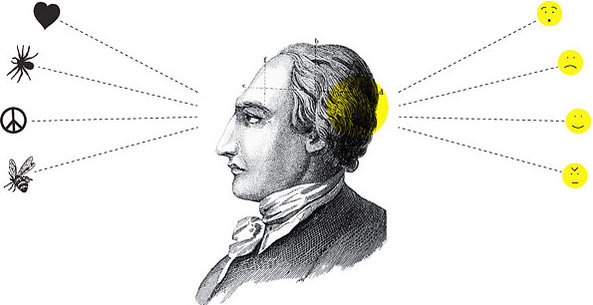 In a great experiment, John Bargh at Yale found the following:

“Volunteers would meet one of the experimenters, believing that they would be starting the experiment shortly. In reality, the experiment began when the experimenter, seemingly struggling with an armful of folders, asks the volunteer to briefly hold their coffee. As the key experimental manipulation, the coffee was either hot or iced. Subjects then read a description of some individual, and those who had held the warmer cup tended to rate the individual as having a warmer personality, with no change in ratings of other attributes.”

We link up metaphors and literal happenings automatically. Everything in our brain is looking for the cause and effect relationship of something we’ve previously experienced.

3 Awesome ways to use storytelling in every day life

Do you know the feeling, when a good friend tells you a story and then two weeks later, you mention the same story to him, as if it was your idea? This is totally normal and at the same time, one of the most powerful ways to get people on board with your ideas and thoughts. According to Uri Hasson from Princeton, a story is the only way to activate parts in the brain so that a listener turns the story into their own idea and experience.

The next time you struggle with getting people on board with your projects and ideas, simply tell them a story, where the outcome is that doing what you had in mind, is the best thing to do. According to Princeton researcher Hasson, storytelling is the only way to plant ideas into other people’s minds.

This is something that took me a long time to understand. If you start out writing, it’s only natural to think “I don’t have a lot of experience with this, how can I make my post believable if I use personal stories?”. The best way to get around this is by simply exchanging stories to those of experts. When this blog used to be a social media blog, I would ask for quotes from the top folks in the industry or simply find great passages they had written online. It’s a great way to add credibility and at the same time, tell a story.

When we think of stories, it is often easy to convince ourselves that they have to be complex and detailed to be interesting. The truth is however, that the simpler a story, the more likely it will stick. Using simple language as well as a low complexity is the best way to activate the brain regions that make us truly relate to the situation and happenings in the story. This is a similar reason to why multitasking is so hard for us. Try for example to reduce the number adjectives or complicated nouns in a presentation or article and exchange them with more simple, yet heartfelt language.

Oh and one last thing. Scientists, in the midst of researching the topic of storytelling have also discovered, that certain words and phrases have lost all storytelling power:

“Some scientists have contended that figures of speech like “a rough day” are so familiar that they are treated simply as words and no more.”

This means, that the frontal cortex – the area of your brain responsible to experience emotions, can’t be activated with these phrases. It’s something that might be worth remembering when crafting your next story.

Storytelling is one of the most powerful techniques we have as humans to communicate and motivate. What are your best tips for telling stories? Have you had similar experiences with telling stories?

I have enjoyed telling stories to my high school students. Stories that have a point or moral carry more weight. Stories, where the location is visually described with as many of the senses as possible is another key. Finally, when telling a story it is important that it identifies as close to the audience's age or experience. There are more keys to storytelling, thank you for allowing me these few.