So this week inadvertently turned into Megachurch Week on the blog. In the event you missed it, everything started  with some data on the continued growth of megachurches. Then, I shared a new infographic from Leadership Network on the financial health of megachurches.

Throughout the week, I’ve received blog comments, Facebook messages, tweets, and emails challenging the positive influence of several megachurches– some by name, some not. I get it. Some megachurches are not healthy environments. As I said Tuesday, I think some are quite terrible and fulfill every stereotype out there. Yet, there are also some great ones, and for that I am thankful. I want to understand them more and, when possible, to encourage them on their journey.

And while I encourage them, I’d also encourage those of you not pastoring or attending megachurches to do the same. Yes, there are some terrible megachurches. Just like there are some terrible churches that run 125 every week. But my job, and yours, is not to indiscriminately cast stones at every church that happens to be, or not to be, a certain size.

Wednesday evening I got an email from my friend Scott Thumma, one of the authors of the research I had quoted and one of the top megachurch researchers in the country, and I got an idea. Scott actually authored the book that debunks megachurch myths, appropriately titled Beyond Megachurch Myths. If you routinely deal with, work at, or attend a megachurch, I would encourage you to buy the book. It’s full of research, anecdotes, and stats and is written in a very accessible way.

Without further ado, here are the nine megachurch myths from Scott Thumma and Dave Travis and a little of my commentary about each of them. Keep in mind that these are their myths and I am commenting on them.

1 – All Megachurches Are Alike

If you are at all familiar with the church names or pastors of those churches, you know they are nothing alike. The same could be said of the church I pastor and any other church plant that meets in a movie theater like we do. Our size and surroundings may be similar, but our churches would likely be very different.

2 – Megachurches Are Just Too Big

“Of the 320,000 Christian churches, 60% of them have fewer than 100 participating adults and children (p. 45). And when surveyed, 64% of megachurch attendees knew as many or more people in the megachurch than they did at smaller churches (p. 46). 80% of attendees felt satisfied with the level of pastoral care they received (p. 47).”

Any church can “be too big.” But as our culture becomes increasingly urbanized and less rural, large churches become less intimidating– just as large cities became less intimidating for farmers in generations past. Simply put, obviously many people do not think they are too big.

3 – Megachurches Are Cults of Personality

Thumma writes “Pastors are often the center of attention whether the church is large or small…It is not surprising that megachurches are often identified by the names of their senior pastors. Any successful enterprise can come to be characterized by its leader. But it is unfortunate that this reality has led critics to suggest that megachurches are more about a pastor’s ego than about God’s kingdom (p. 55-56).”

We are often quick to criticize churches that grow under a certain pastor’s leadership, but good leaders will attract teams to work with them. Those teams will grow and, at times, the churches will become larger and larger– perhaps even a megachurch. That does not make it a cult of personality.

“72% of megachurches have partnered with other congregations to do international missions (p. 80). Because membership is spread across an expansive region and over multiple communities, megachurch social ministry may also be dispersed over a large area (p. 82).”

I ran an entire series last year on how megachurches can be– and often times are– missional in their practice and theology. From counseling ministries to food banks to substance abuse programs to thrift stores, megachurches can make dramatic impact in both their social and spiritual communities.

5 – Megachurches Water Down the Faith

“It is abundantly clear that some churches preach a prosperity gospel of kingdom theology or the acceptance of lifestyles and political positions with which many critics from different theological positions would find fault. However, the vast majority of megachurches have belief statements on paper and in practice that are clearly in line with orthodox Christian doctrines. Even more important, these churches’ organized programs and the values instilled into committed attendees show that this theology is promoted and lived out. (p. 98-99)”

I know big churches and small churches that water down the faith. However, stats show that large churches tend to have more orthodox beliefs and practices than any other size. When Scott and Dave researched what was emphasized in the religious practices of megachurches they found higher percentages of personal prayer, meditations, or devotions (51-42); personal Scripture study (54-47); and tithing or sacrificial giving (47-39).

6 – These Churches are Bad for Other Local Churches

“Individuals will always have disagreements with the actions and theology of certain megachurches and their pastors, but do smaller churches have reason to fear a megachurch the way a mom-and-pop general store might when rumors of Wal-Mart arise? Some of their concern might be justified, but we suggest that the benefits these congregations bring to other churches can outweigh the challenging situations they create.” (p. 119)

This is THE complaint/criticism that I receive more than any other when I write about megachurches. Several of you wrote in that the only reason they were growing was because they were “swapping sheep” from other local churches. Some even claimed stats that local church transfers accounted for anywhere from 60-95% of new members at megachurches. So I went digging for an accurate stat, and Scott has the only one I can find. In their 2009 report Not Who You Think They Are: A Profile of the People Who Attend America’s Megachurches, Scott, David Travis, and Warren Bird provide this breakdown: 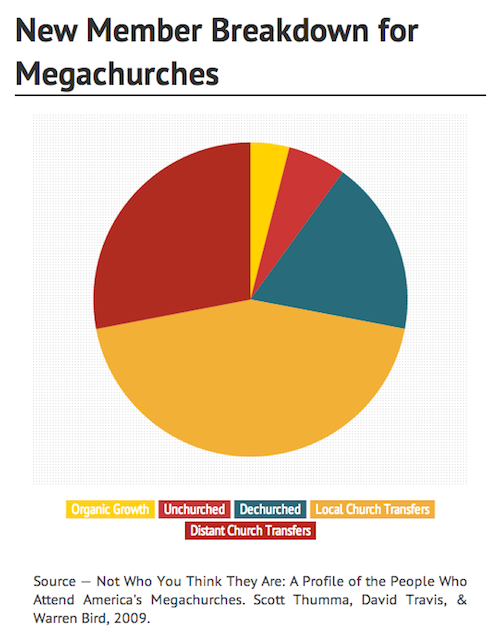 So there it is– about 44% of new members at megachurches are from other local churches– not 60%, not 70%, and definitely not 95%. I hear people saying 90% and I agree that’s a myth. (But it is still way too high… just like so many other churches.)

I wish it were 0%, and every person that joined a megachurch was formerly without Christ, but the fact is that people do transfer between churches. Yet, I don’t know of any research or real evidence (beyond “but I KNOW it is true, Ed”) that megachurches transfer more out of local churches, destroying them while benefiting their own growth.

Actually, my friend (and church expert) George Hunter says that based on his lifelong observation, 80% of church growth (in churches of all sizes) is transfer from other churches. (If you add local and distant transfer, you don’t quite get to 80%, but it is close.) In other words, megachurches transfer like everyone else– but since they are bigger, perhaps we notice it more.

In 2009, our LifeWay Research study of Protestant church pastors revealed “49 percent of new attendees during the last five years have transferred from other congregations, while 32 percent were unchurched and 19 percent were children born to adults attending the church.”

Now these are self-reported numbers from pastors, who I would assume report a higher percentage of unchurched and a lower percentage of church transfers than would be true if we surveyed the actual attendees (as was done in the megachurch study cited above). But the picture here shows us what is true in all churches.

Way too many people transfer from between churches. But it also shows what is not provable– that megachurches are draining and destroying local churches on a widespread basis. Most churches grow by transfer, regardless of size.

There are some differences in how we classified the information and how Scott, David, and Warren did, but it is safe to say that on average, less than half of new church members– regardless of church size– come from other local churches. My guess is that megachurches attract more distant (new in town) transfers from other churches, but that is just a guess. Regardless, at this point, we just don’t have evidence that megachurches transfer people out of local churches at a higher rate than other churches.

I want more unchurched being reached, but by and large with the information we have now, there is not evidence that megachurches transfer in more than other local churches– and in certain instances may do a little less.

For what it is worth, I’d love to see more research here to definitively answer the question, but at this point, someone’s hunch or angst does not make a trend or reality.

7 – Megachurches Are Full of People of the Same Race, Class, and Political Preference

“Many megachurches have intentionally adopted an inclusive vision that the church is for all people no matter what race or socioeconomic group. The leadership of these churches has a strong desire to cultivate an atmosphere of inclusion and embrace a wide diversity of people. This message is translated to the people in the pews.” (p. 138)

8 – Megachurches Grow Because of the Show

Thumma shows that while the worship service elements are important to the growth of megachurches, the greatest influence was the pastor and members’ active involvement in– and passion for– evangelism and integrating newcomers (p. 160).

In the circles in which I run, we call this closing the back door. A church can’t grow if someone walks out the back door every time you have someone walk in the front door. Assimilation is one of the major components of growing churches regardless of its size. An effective assimilation plan will help any church. When you have members– not just staff– who are committed to bringing people in the front door while closing the back door, churches grow quickly.

9 – The Megachurch Movement is Dying

So, long story short, there is a reason there is a book called Beyond Megachurch Myths. I hope you won’t spread them.