Providing leadership in a church setting always necessitates change. Change implies something is going to be different in the future. While change and innovation are not always synonymous, they can often be used interchangeably – like in the following post by Innovation Expert Tim Kastelle. He encourages leaders to first recognize the obstacles to innovation, and then gives four ideas to help overcome these obstacles.

Probably the most common question I get about this blog is “how do you find time to write it?”

It’s the same question that I used to get about reading – where do I find time to read books?

The answer to both is the same – I make time.  One of the ways that I make time is that I don’t watch much television anymore.

You wouldn’t think that writing a blog has competition, but it does.  In order to write a post, I have to not be doing other things with my time.  So as I’m writing this, I’m not watching The Wire, even though nearly every single person I know has told me that I must.  And I’m not reading either.

So that’s one big obstacle to getting your great new ideas to spread – even if there is no obvious competition, you’re competing for time, or attention, or money, or…

Obstacle 2: People that are hurt by your idea

No matter how great our idea is, or how beneficial, some people will be made worse off when it’s executed.

We like to think that our new ideas are benign, or only beneficial. 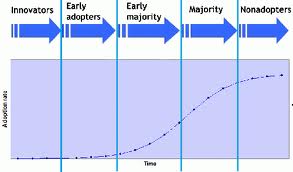 The time it takes to work through the innovation takes time – and that often takes people by surprise.  It is a slow process because it takes time for people to hear about new ideas, it takes time to evaluate them, and it takes time to decide to adopt them.  Once all that happens, it often appears as though successful ideas are overnight successes, but that’s only because they’ve finally hit a tipping point.

How to work through these obstacles

The first issue is that you need to be aware of them.  The idea diffusion s-surve is a research finding that has been consistently supported for 60 years now – it’s is one of the most robust ideas in management research.  Yet it is still often misunderstood – just ask Kodak.

Here are four ideas for addressing this issue:

People often think that having a great idea is the hard part of innovating.  Most of the time, this isn’t the problem.  Getting the new idea to spread is.

If you’re serious about innovating, you will recognize – and work to overcome – the obstacles in front of you.

Tim Kastelle is a Lecturer in Innovation Management in the University of Queensland Business School. He blogs about innovation at the Innovation Leadership Network.