If there is a classification of church that gets put down more than megachurches, it would have to be multisite churches. Is the critique fair? Sometimes. But not always.

As we found with megachurches recently, there is plenty of good that comes with the stereotypical bad. In the megachurch research we saw that they don’t really draw away members from other local churches as much as people think they do, they are healthier financially, and they are growing at a faster pace than smaller churches.

But what about multisite churches? Let me say that I know some really bad ones… they fit all the stereotypes. But, I know some good ones, too. I’ve preached at several that were on mission, raising up leaders, and doing great ministry.

Warren Bird and Leadership Network– the same group that did much of the megachurch research discussed here on the blog– released some research on multisite churches last fall. And wouldn’t you know that it showed several positives regarding multisite churches.

Yep– facts are our friends. And, people who hate multi-site churches will probably not like these facts. (They did not like the megachurch facts either!) The fact is there are some good statistical indicators backing up the approach. 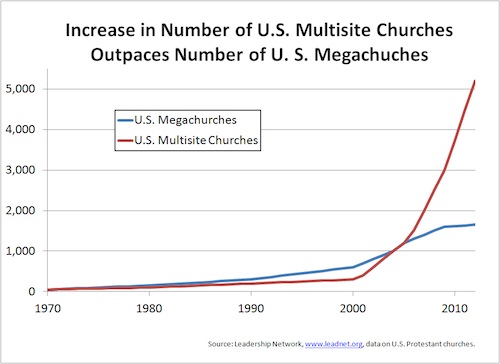 But is this multisite explosion a good thing for churches in North America? Often yes…and sometimes no.

As I see it, the answer is rooted in the motivation and implementation of the strategy. If a church is using a multisite strategy as an alternative to spending $20 million on a centralized campus, most of us would agree that is a wise decision. If they are using it to spread only their “brand of church” or to provide the pastoral team with a “vacation campus” halfway across the country in a tropical destination, it’s probably not a wise decision.

But if a pastoral team is faithful to reaching the communities in which their campuses are located and to ministering to the campuses in an equitable fashion, I wish them all the success. Using a multisite strategy to engage a community through mission and to multiply disciples in the body is a win-win, and it’s happening all over the country.

Unfortunately, multisite churches still face their fair share of issues. The best ones overcome them, but many struggle with similar issues.

In a past article for Outreach Magazine, I discussed three concerns facing multisite churches that I see still apply today.

Despite a church’s best intentions at new sites, sometimes certain pastoral duties get lost: scriptural assignments such as praying over the sick (James 5:14); watching over those placed in your care (1 Peter 5:1); discipline (1 Cor. 5); and breaking bread with the beloved (Acts 2:42). I know that those duties are supposed to be the job of the campus pastor, but we also know it sometimes does not happen. The focus is easily placed on the event more than the community. And sometimes that results in people come for the show without connecting to the community.

Connected to pastoral ministry is the community of faith itself. The church is not merely a gathering, but a united people who work together for the glory of God and the good of their neighbors. One of the weaknesses of event-driven multisite churches is that some tend encourage (unintentionally at times) a come-and-get mentality over a come-and-give ethos. Of course this is not only a problem for multisite churches, but the potential for the problem is significant. Don’t misunderstand me; I get that it can work, but it’s not easy. If you are going multisite, I hope it keeps you up at night, wrestling with ways to build community in a system that can easily discourage it.

So am I anti-multisite? Not at all.

I am not anti-multisite or anti-megachurch. I am thankful for both of them. However, I am anti-consumerism. Church is not about being the best purveyor of religious “goods and services.” And if a megachurch or a multisite thrives by appealing solely to the “come and see” mentality that is so prevalent, we will all regret it.

No matter the number of campuses your church has, reproduction is the goal–reproducing believers, ministries, groups and churches. That can be in a megachurch, multi-site church or, for that matter, in a house church.

So, if you are going multisite, make sure you stay focused on multiplying the mission of God– not just your brand of church or the reach of one person. Let’s make it more than projecting the image of a pastor on another screen.

The best churches know and do that– so learn from them.