As our people use social media all the time it’s becoming a growing expectation that as a church we leverage these tools to help them experience what we do. How can you use these tools within your ministry? 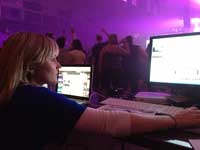 I sat down with Ali Raney who is the Social Media Coordinator at The Meeting House to talk about how they leveraged these channels at a recent event.  Ali is thoughtful leader, talented musician and gift to the church on all things social media.  You should follow her on twitter: @aliraneymusic.

On October 20th 2012, The Meeting House hosted a large event (part worship service / part tailgate party / part epic dance party) for all 13 sites at a local hockey arena (how Canadian!) called One Roof. The purpose of the event was to bring the entire family together under (you got it!) one roof and to kick off the church’s new mission, Transform.

RB: How did you leverage social media to help promote your event before the big day?

AR: We are a large multi-site community of around 6,000 people and we hoped to pack the place out! So two months before October 20th, we made the big announcement on a Sunday morning and immediately followed that up with an e-news blast and a “save the date” on our Twitter feed and all of our Facebook pages. We also introduced a hashtag for the event (#OneRoof) and I made sure to use it every time I posted anything about the event on Twitter (and we asked staff to do the same). A month before the event, we began putting One Roof promo into heavy rotation on all of our communication channels. At least once or twice a week we featured a short, engaging
video on Facebook and Twitter, and/or a photo from last year’s event reminding people to mark it in their calendars. In the last three weeks before One Roof, we did a Facebook cover photo campaign in which we changed the cover photo on each of our 14 pages weekly to feature a picture from last year’s event accompanied with helpful – why, where, who, what, how – details.

RB: Describe how you interacted with your community on the day of the event. 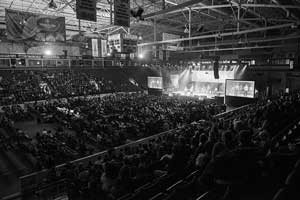 AR: The night before One Roof I scheduled an hourly countdown in HootSuite. I made sure each tweet had momentum by building in excitement, photos, practical reminders and our #OneRoof hashtag. I was sure to follow the hashtag and retweet almost everything that came in from followers. As we got closer to the event, people started to tweet more and more and I was RT’ing about 7 or 8 tweets every 5 – 10 minutes. As soon as doors opened for the event, we began a live-tweeting party! As the 5,000 seat arena was filling up, I had a long list of (pre-planned) fun, serious and meaningful community- building questions scrolling on the big screens. We would tweet a question and then RT our followers’ answers. Our community went crazy for it, and it created an awesome vibe as people waited anxiously in their seats for One Roof to commence!

Later on in the evening we had an epic dance party, deejayed by none other than our Teaching Pastor/ DJ Bruxy. We set the stage throughout the day on Twitter by asking the Instagrammers in our community to start posting photos of their One Roof experience, using the #OneRoof hashtag. We then used all of their photos in a scrolling slideshow throughout the dance party! This was an awesome social media feature, because as people were dancing, they saw photos up on the big screen and wanted to see themselves and their friends up there too. It was an easy way to get people to
interact with us!

RB: What tools did you use to manage your day?

AR: HootSuite for posting and scheduling Tweets, ProPresenter 5’s Twitter app for fielding and posting tweets on the big screen, Facebook, Instagram and Hashtagram.com – the fun web platform that allowed us to automatically create a big screen slideshow of people’s personal photos from the day, using the #OneRoof hashtag in Instagram.

RB: What did you do that you would repeat in the future at an event like this? 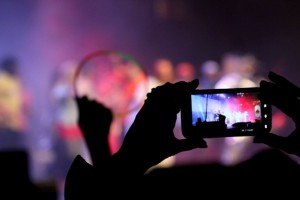 AR: I would definitely do a live-tweeting session again. It created such a cool, community vibe as we waited for the service to start. It helped to build momentum because it was an active, living, breathing thing that people could immediately participate in, and receive immediate gratification in seeing their Twitter handle and photo up on the screens in the arena. It definitely encouraged others to join in the party (and we got 60 new Twitter followers, 72 new Facebook fans and 53 new Instagram followers throughout the day because of it)! I would also do the Facebook cover photo campaign and the day-of countdown again as well as the Instagram slideshow – another great reason to create an event specific Hashtag.

RB: Was there anything you did that you wouldn’t repeat?

AR:I would investigate other Instagram sharing platforms as Hashtagram has limited functionality. You have no control over which photos are put up and in our context, although that wasn’t really a huge concern, it would have been nice to deselect any photos that were in the rotation for too long. I’m not sure if it was a site traffic thing, or something in Hashtagram’s functionality, but it seemed like many people’s photos were never shown (although they followed the instructions correctly) and so we had an issue with the same photos recycling over and over, which got a little stale. It corrected itself a few times over the course of the two hours that we were rolling, but it was disappointing that so many great photos didn’t get any air time on the big screens.

RB: Anything else you want to let our readers know?

AR: I think that social media within the church is one of the most underused methods of evangelism and community building. It (of course) will never (and shouldn’t) replace real time face-to-face relationships, but why not do both well? I’m excited to see where we go from here and I look forward to connecting with other churches and organizations on how best to share the message of Jesus through the use of great social media strategy and application. I would love to connect directly via email with anyone who might be interested in chatting.

Thanks so much for dropping by unseminary … I hope that your able to find some resources that help you lead your church better in the coming days! I’ve been involved in church leadership for over 15 years. Early on I had the privilege of leading in one of the very first multisite churches in North Amerca. I led the charge in helping The Meeting House in Toronto to become the leading multi-site church in Canada with over 4,000 people in 6 locations. (Today they are 13 locations with somewhere over 5,000 people attending.) In addition, I served on the leadership team of Connexus Community Church in Ontario, a North Point Community Church Strategic Partner. I currently serves as Operations Pastor at Liquid Church in the Manhattan facing suburbs of New Jersey. I have a dual vocational background that uniquely positions me for serving churches to multiply impact. While in the marketplace, I founded a dot-com with two partners in the late 90’s that worked to increase value for media firms and internet service providers. I’m married to Christine and we live in Scotch Plains, NJ with their two children and one dog.