What are the connections between these three things?

First: Comics – the magic happens in the gaps between panels

In his terrific book Understanding Comics, Scott McCloud explains that comics are special because all of the real action occurs in the gaps between panels – this is the part that readers fill in using their imagination. 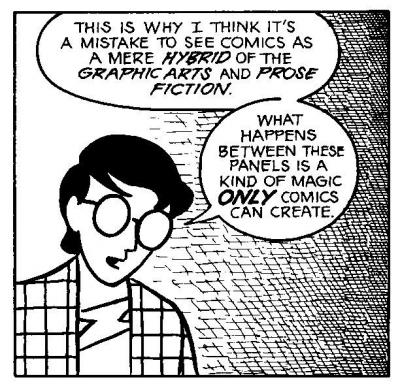 A huge amount of effort and creativity goes into making the comic, but then the reader finishes the story in her head.

Check this out from Seth Godin:

Most people in the US can’t cook. So you would think that reaching out to the masses with entry-level cooking instruction would be a smart business move.

In fact, as the Food Network and cookbook publishers have demonstrated over and over again, you’re way better off helping the perfect improve. You’ll also sell a lot more management consulting to well run companies, high end stereos to people with good stereos and yes, church services to the already well behaved.

The Story: Creativity Happens in the Gaps

I see the same story in all three pieces: Creativity happens in the gaps.

I’m a lousy cook.  So if I go out and buy The Fat Duck Cookbook, and follow each recipe as closely as possible, I still won’t be cooking like Heston Blumenthal.

Why not?  Because I don’t know enough to fill in the gaps.  As much as I love Scott McCloud’s book, I disagree with him when he says that “what happens between these panels is a kind of magic only comics can create.”  I actually think that applying creativity and imagination in the gaps also explains the other two stories.

We can only sell cookbooks to people that are already great cooks because they have the skills needed to be able to fill in the gaps in a recipe creatively and with imagination.  And this is why, as in the case of the photographer and the cook, focusing on tools can be incredibly misleading.

Innovation Happens in the Gaps

A couple of years ago, I met with the senior management team from a really large organisation in Brisbane.  They wanted to talk to me about being more innovative.  We started by talking about what innovation is, and then quickly went through managing innovation as a process, and a few other key ideas.

Then one of them said: “We tried a big innovation initiative a few years ago and it didn’t work.”

There were nods around the table.  I said something like:

“Let me guess.  You asked everyone for their ideas.  Lots of people submitted innovation ideas, but there was no mechanism in place for choosing the best ones.  You didn’t have any budget attached for execution either, so nothing much came out of it.  And in the end, everyone that put an idea in ended up feeling disillusioned and morale actually went down.”

As I talked, there were sheepish nods around the table.

They didn’t know enough about innovation to fill in the gaps.  They wanted to buy the innovation version of the expensive camera, or the great stove.

They had the same problem that Seth Godin outlines: they’re actually not good enough innovators to benefit from the tools that are available to them.

What Should You do If You’re Just Starting Out?

Forget about tools.  You have to build your basic innovation skills.

Once you’ve done these things, then you can go out and start buying expensive tools to support innovation.  But only then.

There are no innovation short cuts.  You have to build your skills first.

Once you have, then you’ll have enough knowledge to really use your imagination.  Then you’ll know that innovation happens in the gaps.

Tim Kastelle is a Lecturer in Innovation Management in the University of Queensland Business School. He blogs about innovation at the Innovation Leadership Network.