Will Mancini, founder of Auxano and Younique, writes about the importance of leadership stories here. He believes that storytelling and understanding the nuances of story will help leaders in the daily ebb and flow of communication. The first, appropriately, is your organization’s creation story.

As a leader, you should know more about the creation story of your organization than anyone on the planet. What are the circumstances—passions, problems, and people—surrounding how the organization got started to begin with?

Mastering the richness of the creation story will help in two major ways. First, it will hold insight into the unique culture of the organization and therefore future decision-making and vision. Second, your mastery of the story itself will bring tremendous credibility with people when initiating change.

With a passion of Disney history, I’m always grateful to visit Disney properties and immerse myself in the stories and culture of Walt Disney and the “kingdom” he began. During a recent multi-day visit to California, I had the opportunity to visit Disneyland several days, experiencing both the familiar and new perspectives.

Take this image, for example: 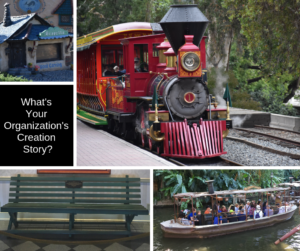 In talking with current Cast Members, Tour Guides, and former Imagineers, various stories were given as to the origin of Disneyland:

What is the true origin of Disneyland?

I believe that all of the above contributed to the creation of Disneyland. And the common denominator of all of them?

> What about your organization?

ACTION STEP: Write a one-page, 2-minute creation story talk. If you have any gaps in your knowledge, interview people in your organization until you know more than anyone else.