“I ask all of our first time guests why they decided to come to our church and 90% of them said they were driving by and were intrigued by our site and our new building, and that is all thanks to the creativity of Visioneering Studios.” 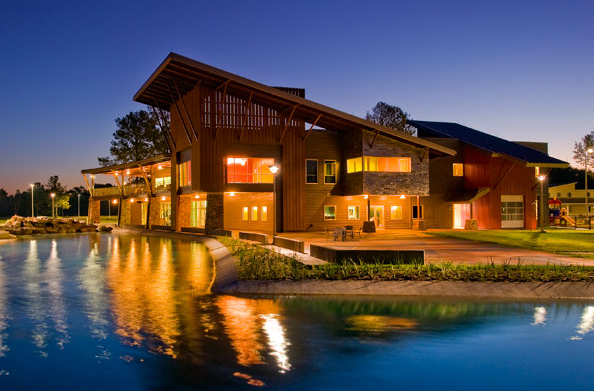 If you were driving down a road in your town and saw the above building, would you be intrigued?  Would you want to check it out? As you look at that picture, who do you think this building meant to attract?  Who was the primary target to get sucked in by the design and amenities?

If you said MEN…then you would be correct. But not just any man, a mid “thirty something” man.  And why would a church focus on that age group and gender?  It is actually pretty simple for the leadership at Northside Christian.

They believe that if they can attract men in their mid thirties, they will likely bring their wife and 3 +/- children as well. In most cases, it is easier to engage the entire family if the husband/father is leading the charge and is compelled to attend. For most men, there is too much talk about love (especially loving another man….YUK), surrender, “feeling” and a whole host of other words and songs that are just not appealing.

So what did this church decided to do?  They were intentional about communicating a story and message to the target they wanted to attract.  They made the conscious decision to put “bait on the hook” as they fulfilled their calling to be fishers of men.  The attractional elements of the physical campus was intended to be appealing to those they were trying to reach just like the worm, minnow or lure are on a fishing hook.  If you going fishing for bass, you would not leave the bait at home.  Yes, it is possible to catch a fish on a bare hook…but it less likely and it is much harder and far less rewarding.  So why do we think it is wrong to put “bait” on the hook when we are fishing for souls? Given some recent responses to my other posts on “story”, I am sure some of  you are saying “But the Holy Spirit is the only thing we need…he will draw them in…why should we try to manipulate.” While I am in complete agreement that the Holy Spirit will move in a persons heart to take action, God  also gave us eyes…ears…noses…and other sensory attributes that he uses to influence us.

For this church, they decided to use several types of bait…here are a few examples:

1. The overall design is that of a lodge or “man cave”.  It is very masculine and appealing to a man. It makes me want to go hang out, how about you? 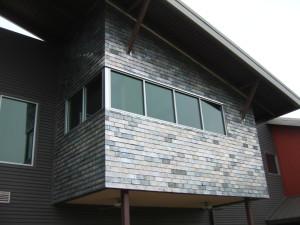 2. The materials are “manly”.  From the stone to the exposed wood grains to the exposed metal to the car license plates used to clad a section of the facility (above pic), the materials scream MAN!  Women are generally drawn in by color…but men are attracted to materials.

3. They took the “bait on the hook” concept and developed a fishing hole in front of the building that is open to the public…that they actually stock with fish.  Again, the idea is that a mid-30 year old man with 3 kids would bring the kids to the fishing hole (i.e. a WELL…see this post for more on that concept) even if they have never gone to the “church”…or what we might refer to as the Temple experience.

4. Amenities…besides the fishing hole, this church has been deliberate in the location of their exterior public spaces.  Even if you are not interested in fishing, but looking for a place to site outside by a gentle waterfall to read or you have those 3 young kids and need to get them out from under mom’s feet and blow out some pent up energy, this campus shouts…COME HERE.  The playground is open to the public and the outside sitting areas and tables are inviting to anybody just looking for a place to hang and do life with others. In addition, they were judiciously placed on the front side of the campus so they are visible to people passing by…more bait!

Visioneering has just finished Phase II for this church and the new kids space continues this theme and attractional relationship with their community. You can see why “Your Kids Won’t Want to Leave”, on the blog by Jody Forehand….which is another form of “bait”.

Are you ready to go fishing for your community?   Is your church more interested in “cleaning” fish or catching them?  If it is the later, make sure you have the right bait.

Tim Cool is the Founder and Chief Solutions Officer of Cool Solutions Group, a company leading organizations to be intentional with the planning, development and life cycle management of the facilities God has entrusted them. Tim has assisted nearly 400 churches over the past 28 years, throughout the United States, with their facility’s needs. Tim has been married to his best friend, Lisa, for 29 years and resides in Charlotte, NC with their 17-year-old triplets. They are active members at Elevation Church.

This definitely qualifies as a "Cool" article. Thanks. <