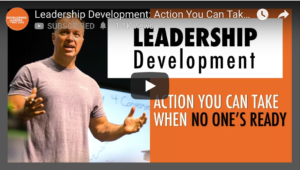 Have you ever looked around your organization for a new leader only to discover that nobody is ready? That can be the most discouraging feeling, but it doesn’t have to be your reality.

Today, I want to talk to you about three ideas you can use to develop those leaders who aren’t quite ready. Before we dive into these ideas, I want to share a concept with you. For those of us who have been in ministry, and I’ve been in ministry for over 30 years now, we know that season of the year, around August and January, when you sort of get sick to your stomach because it’s a new season of ministry ramping up. You look around, you go, “Oh, no, we need more leaders. We don’t have enough leaders,” and it always seems to be that time of year you get that feeling.

It’s also that time of year you start to look around for new leaders to put in those vacant positions. You’re looking around the organization and you go, “Well, he’s not ready. He’s not ready. She’s not ready. Oh, there’s somebody that’s ready,” and we pick that person up and we put them in the leadership position. Then, we go to our senior leader and say, “Hey, I just developed a new leader,” but, really, you didn’t. You just did leadership placement.

What I want you to understand, there’s a big difference between leadership development and leadership placement. I’m afraid that the local church today has really defaulted to a lot of leadership placement rather than leadership development. What I want to do is … To solve this problem, we have to start developing leaders who aren’t ready, so I want to give you three ideas that we can dive into that will help you begin to build those leaders who aren’t quite ready. Stay tuned until the end because I’m going to share a fourth bonus tip, as well. Let’s dive in.

I think it’s interesting when you look at the life of Jesus. He recruited some men who weren’t quite ready. Think about it. In Matthew 9, he approached Matthew, who was a tax collector. He was despised by people. What was he doing at the time? He was collecting taxes. Jesus walked up to him and said, “Hey, come follow me,” and Matthew did. It’s fascinating because Jesus looked at him not for what he was but for what he could be. Jesus did the same thing with Peter and Andrew. He walked up to them as they were fishing. These were uneducated fisherman, and he said, “Come follow me.”

Now, he didn’t take these men and immediately throw them into leadership. No, he began to walk with them. He began to disciple them. He was teaching them how to pray, how to have faith. He was teaching them the basics of the faith before he really started developing them as leaders, but he took a risk on people. He saw them for their potential and began to make an investment in them. Look around your church. Look around your organization. Who is it that you need to take a risk on?

Idea number two is look for willingness not just readiness. A lot of times, what we do is we look around the organization and we’re looking for that new leader who is ready to plug in, a plug and play leader, but they’re just not ready. We have to learn to look for willingness, not just readiness. I will never forget when I learned this lesson. I was leading a small group … This is back when we planted a church. I was leading a small group and, after small group one night, this young man named Roger came up to me and he looked at me and he said, “Mac, I want to do what you do.” I said, “What do you mean you want to do what I do?” He said, “I want to learn to lead a small group the way you lead a small group.” Man, he said, “Man, we just feel like family, the way you lead discussion and the way you really network us together and connect us together and bond us together and help us really grow in our faith. I want to learn to do what you do.”

Now, the whole time Roger was telling me this, I was looking at him and, in my mind, I was thinking, “You can’t do what I do. You’re not ready,” but he was so persistent. He wouldn’t give up. He just kept pushing me, saying, “Would you teach me? Would you teach me?” Finally, I said, “Okay, Roger. Here’s what we’re going to do. I want you to show up to small group 15 minutes early next week and plan on staying 15 minutes late.” He did. Next week, he shows up 15 minutes early. We go upstairs in the room over the garage and I said, “Okay, Roger. One of the first things you have to learn as a small group leader is you have to learn how to build a sense of biblical community among the small group. Here’s how you do that,” and I shared five or six things on how to do that. Then, I said, “Okay, let’s go downstairs. Everybody is about to come in. I want you to watch me do this tonight.”

We went through group that night and then, that evening, after everybody left, he and I went back upstairs. We sat down and I said, “Okay. Tell me what you saw. What did you see me do right and then what did you see me do that I could have done better?” We sat there and we had a 15, 20 minute discussion about that. Next week, Roger shows up early again. I said, “Okay, this week, Roger, I’m going to teach you how to lead an icebreaker question. Here’s why icebreaker questions are important and here’s how you lead one. Watch me lead it.” Then, that night, after group, we went upstairs, took 15, 20 minutes. We debriefed it. Then, the following week I gave him the icebreaker question to ask the group. Again, went upstairs, debriefed it to see what he did well and what he could do better. We just did this week after week after week until, finally, next thing you know, Roger was ready to lead his own group.

Here’s what I learned from that. We have to learn to look for willingness, not just readiness, because, when we only look for readiness, we’re only going to do leadership placement rather than leadership development.

Here are three traits that I look for when I’m looking for a potential leader, and I call it TIP, T-I-P. First, T is teachable. Teachable. Is the individual teachable or do they act like they already know it all and have it all together? I’m looking for somebody that’s really teachable. I is integrity. Integrity. Is this a person that I respect, that others respect? Is it a person other people follow because they’re a person of character? P is passion. Are they passionate or are they passive? I’m going to tell you something. If you can find somebody that has a little bit of passion, you can teach them anything. When you’re looking for a potential leader, look for these three things, teachability, integrity, and passion. That’s somebody you can take some time and invest in. That’s the type of person you can begin to do leadership development with, rather than just leadership placement.

Okay, I said if you’d stick around til the end, I’d give you a bonus idea. Here’s the bonus idea, and it is my favorite. Give task before you give title. So often, when we are looking to fill a position and we’re identifying people that can fill that position, we measure the people against the full scope of that position. We can’t do that because we look at them and we go, “Well, they’re not ready to do that. They can’t do that entire job.” Well, of course they can’t. They’ve never done it before. We can baby step them there by giving them tasks along the way, before we give them the title. You give them responsibilities related to that role under your mentorship.

For example, let’s say that you needed to have a brand new children’s director. You find somebody that you think has the potential, you could develop them there. You can’t give them the title yet because they’re not quite ready for that, but you can give them task. For example, you could say, “Hey, I’m going to be recruiting a new children’s leader. I want you to come with me and follow me and watch me recruit a new team member.” Then, a few weeks later, “Hey, I want you to recruit somebody new to the team.” Then, “Hey, I want you to watch me lead one of our team meetings.” Then, “The next team meeting, I want you to assist me. Not lead the whole thing, I just want you to assist me in leading part of that team meeting.” Then, another time, “Hey, sit down. I want you to help me plan out this next quarter of activities for children’s ministry because planning is such an important competency related to this ministry.”They sit down, they help you do that. Then, next time, you can give them the opportunity to plan that. Here’s what you’re doing. By giving them task before you give them title, you are baby stepping them into the competencies they need in order to really lead in that position.

Thanks for reading and watching.

Connect with an Auxano Navigator to learn more about developing your Leadership Pipeline.

Mac is a pioneering influence in the church planting movement. In 1997, he planted Carolina Forest Community Church (Myrtle Beach, South Carolina). In 2004, he began serving as Leadership Development Pastor at Seacoast Church (Charleston, South Carolina) where he served for over six years. In July 2010, Mac Lake joined with West Ridge Church to become the Visionary Architect for the LAUNCH Network. In 2015 Mac begin working with Will Mancini and Auxano to develop the Leadership Pipeline process. He joined Auxano full time in 2018. Mac and his wife, Cindy, live in Charleston, South Carolina and have three children, Brandon, Jordan and Brianna.