You’ve taken a big step to read this article if you’re reading it the week it was published. It’s September, and that means you’re slammed. You are either launching or have recently launched initiatives for the fall. If you have kids to get into the school routine, that only compounds the busyness.

Will this September get your organization and your people moving forward? Will this fall’s initiatives make a difference? Or will it be a fast-moving treadmill, drawing a lot of energy but not getting anywhere?

Last September was as busy for leaders everywhere as this one is. But did it get them as far as they hoped it would? Or are they merely back to doing more of the same as last year—maybe a little more, maybe a little less, maybe some changes around the edges, but essentially making the same swift strokes to keep the organization’s head above water?

If you feel that your organization’s disciplemaking culture is stuck, you are not alone. Many leaders feel that way.

When we’re stuck, our instincts push us to try a little harder or maybe to flip some switches and turn some dials that are easy to reach.

There is not just one kind of stuck relationship, however. To understand how to move your culture forward, you first need to understand what the relationship between organization and people is like today. You diagnose it by asking two questions:

These two questions yield four answers that indicate where your organization is now and where it needs to go next. 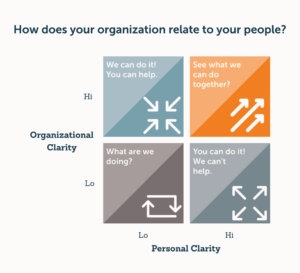 Relationship #1: “What are we doing?”

When organizational clarity is low, the organization may help people, but without a clear vision, its leaders’ hope for the future defaults to merely engaging more people. Likewise, when personal clarity is also low, an individual may be loyal to the organization while it delivers what he or she likes. But without a clear vision, the individual defaults to seeking personal gratification, even if it is defined in spiritual terms.

No matter what good things might be happening in the organization, when organizational clarity and personal clarity are both low, the organization has gotten stuck in “preservation mode.” No organization starts out this way. There was always a fire, a zeal, a cause that people took a risk to make real. But it’s common for organizations to become victims of their own success. With so much to keep track of and with so many people who joined for different reasons than those at the beginning, it becomes hard to remain clear on what the organization does and why and how it does it. Under these conditions, the unconscious, default vision for both the organization and its people is “keep what we like and get more of it.” Together they spin in circles.

Unfortunately, when people confuse the organization’s calling with their personal calling, over time they frequently lose interest, lose faith, or lose heart. They joined the organization’s cause by filling a slot where volunteers are needed, because they have been persuaded that it is what Christ wants them to do. But in time they get restless because they come to feel like a square peg in a round hole or burned out because they don’t get fueled and impassioned by what they are doing.

Others are more content with their service. They get acknowledged and rewarded for serving in the same volunteer role for 20 or 30 years. But sometimes you may wonder, “Have we let this person down? Is it really God’s will for this person to stay in the same function all that time? Or have we kept the person in the place that was convenient for us?”

When organizational clarity is high but personal clarity is low, the organization often unintentionally, unknowingly manipulates people into positions they have no business committing to because they do not accord with their divine design. Or they keep them in positions forever that they can never leave. Volunteers become victims of the organization’s success, and sometimes they flake away feeling used. In the end, the organization is stuck in “direction mode”—that is, because it is so sure of its direction, it is equally sure about how to direct others. Ironically, organizations fail to reach the disciple-making goals they sincerely believe in because they subtly come to count their people more as human resources than as individuals on unique journeys with God.

For example, the organization may want the leader to channel her talent into a neat, prefabricated box of volunteering. But if the person persists in pursuing the unique vision God gave her and cannot find a home for it in the organization, she will eventually redirect her service, money, and time away from the organization that she used to give there.

Sometimes this happens in the name of being “missional.” An organization sees itself as succeeding when it urges its people to follow their respective callings out into the world, but it provides them no support or equipment to succeed in mission there. It may desire to be a great “sending” church, but its impact isn’t sustained as individuals get exhausted without the help of the body of Christ.

Alternatively, the organization may embrace multiple driven, dynamic leaders, but their visions are incompatible. Like vandals spraying graffiti, they make great art, but they paint where they don’t belong. As each one tries to steer the organization according to their own passion, conflict erupts or else the organization breaks down into disunited, self-contained silos. In all these scenarios, the organization is stuck in “permission mode,” allowing people to function but seeing scant impact because of wasted, contradictory, and unsustained energy.

Relationship #4: “See what we can do together?”

When both organizational and personal clarity are high, the organization functions as an Olympic team. It recruits, trains, and equips people to be world-class leaders, devoted to the same goal of success in obeying the Great Commission. Each individual is a champion, both performing solo and contributing in community in a variety of ways according to their unique talents.

I encountered a great illustration of this principle when one of my daughters studied chemistry. In chemistry, a productive collision occurs when the correct side of one molecule smashes into the correct side of another with enough energy to burst their molecular bonds and re-form into something new. When an oxygen molecule is part of the collision, it releases a great deal of energy. This is called combustion, commonly experienced as fire.

When breakthrough clarity both for an organization and for individuals collide productively, they combine into something much stronger than either of them alone, and they unleash extraordinary energy, power, and movement. In short, when an organization and its people both know their special callings from God, the collision lights a fire for him that cannot be quenched.

Kelly has spent her vocational life as a not-for-profit executive, consultant and development professional. Former to becoming the CEO of Younique, Kelly founded OptUp Consulting, served THINK Together as the Chief Engagement Officer, and led Vanguard University as a Vice President and President of the Vanguard University Foundation. Kelly graduated from the University of Virginia and earned her Masters degree from Princeton Theological Seminary. She is married to Rev. Dr. Richard Kannwischer and is the proud mother of Danica (age 15) and Ashby (age 13).