Leadership is a journey…a journey that’s probably different than you thought it would be before you stepped into leadership.

When I was young, I always thought leaders had it all figured out. That the uncertainty would one day disappear once I had more life and leadership under my belt.

But as you eventually learn, it doesn’t really work that way.

In fact, I think most leaders struggle more than they let on. I know personally, at one point or another, I’ve struggled in each of the areas listed below. But, at the time, because I didn’t want to tell anyone how I really felt, I kept mostly quiet.

Looking back, I realize for too long I kept far too much of it to myself.

You know what keeping it to yourself does, right? It leaves you isolated. And the silence gives fear power—power it should never have.

Just to let you know you’re not alone, and to break the power of darkness by cracking some daylight, here are 11 secrets most leaders won’t tell you:

1. I’m less secure than I appear

The together exterior doesn’t always match the fragile interior.

Security is a journey for sure…a tough one. Most people don’t like insecure leaders. But insecurity is a trap…the more insecure you are, the more you resist telling anyone you’re insecure. And the more they dislike you.

If it helps, I outline 5 signs you’re an insecure leader in this post, and 5 ways to become a more secure leader here.

I think the best way to start dealing with your insecurity is to admit it, and deal with it. Counsellors’ offices and best friends are great places to start with that by the way. So is prayer.

2. Getting close to God isn’t easy

There’s a particular pressure on pastors and church leaders to have a ‘great’ relationship with God.

I think church leaders struggle with God in different ways than most people. I outline those ways here.

Leadership is complex and involves going through seasons of unpopularity. It also involves making tough calls that can make you the goat, or at least feel like a goat.

Add to that the fact that most of us who are driven type leaders don’t do relationships easily, and sometimes it’s lonelier than it needs to be.

Let’s just say it. Our Instagrams lie. It’s not always easy at home.

It’s gotten better over the years, but there have been seasons in my leadership where my family got too much of my unfiltered stress. Not fair. Not fair at all. But true.

Home is hard. Work is hard. Put the two together in an ill-thought through combination and it can be lethal. I really believe that, in the long run, everything rides on how you lead at home.

We pretend the criticism doesn’t hurt, but it does, whether we admit it or not.

We put our poker faces on, but deep down it stings.

Tell God. Tell somebody. And don’t let your family bear the brunt of it every time.

There are ways to make criticism sting less, but acknowledging it hurts is a great first step.

6. I’m afraid to ask for what I really want

I’ve usually been pretty forward in my leadership and I’m grateful for an incredibly honest dialogue I have with my staff and elder team where I serve.

But there are seasons where I’ve been afraid to ask for what I really want. And even as I type those words I think “That sounds so selfish.”

You know what I’ve found? Almost every time I’ve asked, someone said “Why didn’t you ask sooner? We’d love to help.”

See what secrets and silence do?

7. I’ve thought about leaving even though I’m staying

You’ve thought about leaving, even though you’re staying…true? Of course it’s true, unless you just started last Tuesday, and even then…

Everyone goes through seasons of doubt and questions about the future.

But when you sit in silence with this one for too long, you end up waffling. Not staying, but not leaving either. You end up putting in half an effort, and you’re half the leader you could be.

Brad Lomenick offers some great insight in Episode 27 of my podcast about how to know when it’s time to go, and I outlined 5 signs it’s time to move on in this post.

One of the reasons leadership is hard is because you deal with so many intangibles. It’s brain work. People management. Conflict management. Getting people to do things they wouldn’t ordinarily do.

On bad days, many leaders I know dream of doing something entirely different. For a season, my escape job was to stack boxes in a warehouse. Because at least if you moved a box, it stayed moved.

9. I feel like I don’t really know what I’m doing

Eventually you reach a level of leadership, either because you’ve been at it long enough or because whatever you’re leading got big enough, that you realize there are no clear answers. There just aren’t.

You surrounded yourself with the smartest people you could and you realize that even the smart people don’t know what to do. That’s where real leadership begins—when you feel like you don’t really know what you’re doing, but you keep doing anyway.

That’s how history gets changed. You were just the last person standing, even though inside it felt like sheer confusion.

11. I thought we would have made more progress by now

You don’t want to say it out loud, but you really do think you would have made more progress by now.

The fact that your vision is bigger than your reality is paradoxically a sign that you’re a good leader.

So keep being mildly disappointed, because it will always spur you on to more.

And one day when it’s over you’ll look back and be amazed at how much you actually accomplished.

Carey Nieuwhof is lead pastor of Connexus Community Church and author of the best selling books, Leading Change Without Losing It and Parenting Beyond Your Capacity. Carey speaks to North American and global church leaders about change, leadership, and parenting. 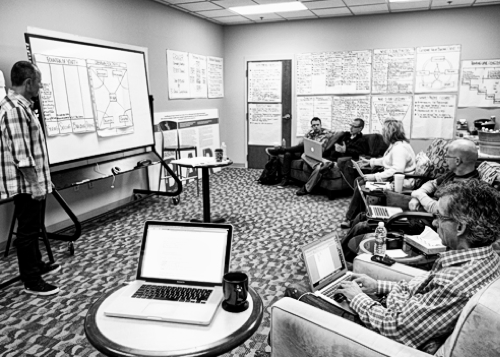 Over the last few years, I have enjoyed learning more and more from the contribution of Tom Paterson. Tom is a brilliant consultant and friend of Peter Drucker who innovated a very specific, high-impact model of strategic planning in the business space. I am grateful for five gentleman who have been a part of my own access and “digestion” of StratOp as a certified facilitator : Doug Slaybough (pictured above & former guy beyond the success of Rick Warren’s Purpose Driven organization), Michael Murphy (current president of the Paterson Center), Greg Hawkins (executive pastor of Willow Creek Community Church), Buck Rogers (friend and master facilitator) and Todd Wilson (kingdom entrepreneur behind Exponential and a fellow clarity junkie).

Most recently, I have completed the integration work of utilizing Paterson’s StratOp process for churches as a follow-up to Vision Pathway process that I have developed and used for twelve years, through the ministry of Auxano.

Simply put, The Vision Pathway and StratOp are the two best ways to solve two different but related problems for the local church leaders.

In this post I want to explore the basic differences. In the rest of a series I want to show:

VISION PATHWAY AS A UNIQUE SOLUTION

The Vision Pathway  was created to solve the problem of cut-n-paste ministry models and photocopied vision proliferated by books and conference in the church space. The result is a lack of freedom, confidence, passion, credibility and ultimately progress for a local church leadership team.

The Vision Pathway was developed in 2001-2004 from a biblical  understanding of the church in order to develop new competencies in thinking, leadership and communication for local church teams. The deliverable of the process is a fully articulated vision and ministry model that takes into account a church’s heritage, the unique community context, the distinctive congregational strengths and Spirit-guided passion of the leadership. The process was formally articulated in the book, Church Unique in 2008 with the subtitle of “How Missional Leaders Cast Vision, Capture Culture and Create Movement.” Church Unique continues to be the leading book in the church vision and planning category since it’s publication.

The baseline Vision Pathway requires a minimum of 6 days of collaborative work over a several month period. The Pathway is built with 5 master tools, that cover 8 big ideas, with 10 specific deliverables with dozens of “add-on” features and optional sub-tools based on church’s theological bent, size, life-stage, growth challenges and culture. There really is no other comparable process for church leaders to experience.

STRAT-OP AS A UNIQUE SOLUTION

StratOp was created to solve the problem of lengthy strategic planning process that don’t get total buy in across the executive team of large businesses.  The result is a lack of daily cooperation and coordination of diverse functional units towards the strategy priorities of the business.

StratOp was birthed through a challenge in 1980 issued to Tom Paterson to reduce the timeframe and increase the effectiveness of formal strategic planning. The design parameter was three days, which was given to Paterson by Thomas E. Bennett, who was the the Vice President for Corporate Planning for Ingersol-Rand Company. The content of the process is available only through the Paterson Center to certified consultants and facilitators. (Approximately 180 have gone through the process in the last 15 years.)

The StratOp process is a 3-day event (with a typical 2-day follow-up process with key individual leaders).  It works through 25 “tools” that are collaborative conversations ranging from 30 minutes to 2 hours. The deliverable is a set of dashboard-like documents that can be used in the operational flow of leadership and management. While there are many planning processes out there, I have not seen one better for creating priorities within a one-year horizon. In addition several Paterson disciples are Jesus-followers who have applied what was originally designed for business, to the local church.

Read more from Will Mancini on his blog: WillMancini.com

Are you ready for a new level of team focus, energy, and productivity? Connect with an Auxano Navigator and start a conversation with our team.

Will Mancini wants you and your ministry to experience the benefits of stunning, God-given clarity. As a pastor turned vision coach, Will has worked with an unprecedented variety of churches from growing megachurches and missional communities, to mainline revitalization and church plants. He is the founder of Auxano, creator of VisionRoom.com and the author of God Dreams and Church Unique.

See more articles by Will Mancini >