These were nothing less than shouts from God.

What I mean is that He spoke so clearly and so strongly impressed Himself and His will on my spirit, it was as if He had thundered from Sinai. There was no doubt in my mind what I was to do. His finger had written it on the tablets of my heart.

God will do that from time to time. For Moses, the first of many shouts to his heart from God was a burning bush. The story is worth a close look:

Now Moses was tending the flock of Jethro his father-in-law, the priest of Midian, and he led the flock to the far side of the desert and came to Horeb, the mountain of God. There the angel of the Lord appeared to him in flames of fire from within a bush. Moses saw that though the bush was on fire it did not burn up. So Moses thought, “I will go over and see this strange sight—why the bush does not burn up.” When the Lord saw that he had gone over to look, God called to him from within the bush, “Moses! Moses!” And Moses said, “Here I am.” (Exodus 3:1-4)

A familiar passage to you, perhaps. But did you notice the chain of events? First, we have Moses doing life the way he had been doing it for years. It was a day like any other, a good reminder that we can seldom anticipate God’s communications.

Second, God appeared to him through a burning bush. A strange sight, as it burned without burning up. It wasn’t the bush that was significant; it was the fact that God brought something into Moses’ life that demanded attention. It could have been a crisis or traumatic event; it could have been a moment of helplessness or of feeling overwhelmed. Anything that invades your life and demands your attention can be an opening salvo from God.

Third, Moses decided to pay attention to the event. He went over to it, determined to explore what it might hold for his life. This, too, is key. The events in our life are experienced, but few are explored for what they might mean on the deepest levels of who we are and what God might want to say to us.

Fourth (and this is critical), did you notice the following words: “When the Lord saw that he had gone over to look…?” God did not speak, nor does it appear that He was going to speak, unless and until Moses approached the bush. When Moses went to look, then God spoke. If you want to hear a word from God, a good step is to demonstrate your willingness and desire to hear it.

I’ll never forget reading a challenge from an address given by Norton Sterrett in 1948 to a group of college students. All he said was, “How many of you who are so interested in finding out the will of God for your life spend even five minutes a day praying for Him to show it to you?” And it is precisely that five minutes a day that equates to going over to look at the bush.

Let me get very specific:

How fervently have you prayed?

How passionately have you searched the Scriptures?

How intently have you sought counsel?

How purposefully have you launched out in ways that afford God the opportunity to direct your steps?

Remember, hearing a word from God is anything but a passive enterprise.

For a leader, listening is perhaps the most important skill of all. As a leader, we must learn to listen while navigating along with the person speaking toward a common destination – mutual understanding.

Whether your talents are in sales, systems engineering, administration, technical support, or leadership, listening to connect with others – requires a new and powerful form of deep listening.

When having a conversation you can improve your precision listening skills by asking questions that will help you gain more insight from the speaker. By intentionally navigating through a conversation, we can move from making assumptions to gaining clarification of meaning and intent – and it happens by asking the right questions.

Judith Glaser, CEO of the Benchmarking Institution and Chair of the Creating WE Institute, has developed examples of these navigational-listening questions that will guide your next important conversation.

You can download these questions along with other practical helps for your next conversation here.

A recent release of our SUMS free book summaries also spoke directly to this topic. 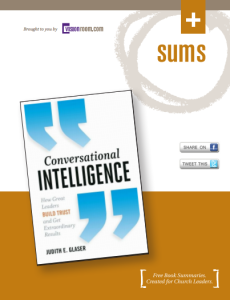 Judith E. Glaser is the CEO of Benchmark Communications and the chairman of The Creating WE Institute. She is the author of six books, including Creating WE (Platinum Press, 2005) and Conversational Intelligence (BiblioMotion, 2013), and a consultant to Fortune 500 companies.

What if active listening is really just the baseline level of acceptable listening rather than the ultimate destination point? What if, instead of us viewing active listening as something to achieve, we look at it as more of a basic expectation upon which we build and grow?

There are at least three levels of listening that can be layered on top of active listening.

This might be closest to what’s typically referred to as active listening. We hear what’s being said, understand its intent, and respond accordingly. This is productive, respectful listening. This bears all the hallmarks of active listening. We’re engaged, there’s eye contact, we’re not interrupting, and so on.

Now don’t skip this one because you’ve heard this word tossed around all the time. It’s not nearly as simple as we make it out to be. “I know how you feel” isn’t empathy. “Walking a mile in someone’s shoes” isn’t empathy. It may often be more akin to the pretending we chatted about before. Resist the urge to speed past this. When my professor first explained what empathy actually is, it knocked me completely on my – how do the French say it? – derriere.

As he explained it, empathy involves “reflecting and experiencing other people’s feelings and states of being through a quality of presence that has the consequence of their seeing themselves with more clarity,” even without any words being spoken. Do you get how huge that is?

We also strive to hear the intention behind the content with sincerity and respect. Empathizing enables us to respond by facilitating the other person’s intention (a response is not a defensive reaction). We do this by attempting to see the big picture and respond with the idea of maintaining a long-term relationship within which we can serve and care about the other.

Generative listening is sophisticated listening; it is active, inventive listening that evokes the best qualities in others by creating the other’s brilliance. This is what Robert Greenleaf – essentially the father of the modern servant leadership movement – was referring to when he said that “people grow taller when you listen to them.”

Generative listening is a creative act. You become a finely tuned receiver that picks up what currently is, and also what wants to be, communicated. Ideas and solutions that you hadn’t considered before may simply emerge, at least in part, because your stubbornness and ego are in check. By letting go of preconceptions and biases; you’re able to sit patiently in the “not knowing,” unthreatened by differences of opinion. This allows the act of listening to birth something truly original and worthwhile.

The notion of silence is another aspect of generative listening some refer to as generative silence. Some find silence awkward or oppressive, but a relaxed approach to dialogue will include the welcoming of some silence. It is often a devastating – but very important – question to ask ourselves: If I say what’s running through my head, will I really improve on the silence?

So, you see, when we begin to listen in these ways, our listening becomes so much more than simply “good communication.” It becomes a vehicle to serving the other. It evolves into a way we help others grow taller.

Matt is a cancer survivor who’s dead set on making the world a better place by helping organizations be better places to work. He’s currently Chief Culture Officer at Mazuma Credit Union, and also does speaking and consulting work to help other organizations with culture, development, recruiting, and leadership. He has been recognized as one of Credit Union Times’ “Trailblazers 40 Below,” and has spoken at national conferences for CUNA and NAFCU in addition to other events. He has written articles for Training magazine, the Credit Union Times, the Credit Union Executives Society, is a contributor for CU Insight, and an editor for CU Water Cooler. He is also a Training magazine Top 125 Award winner. Matt is earning his Master’s degree in Organizational Leadership from Gonzaga University.