“Succession planning” is actually a catchphrase for five distinct conversations.

You are somewhere in one of those conversations right now – do you want to know the difference?

You can lean the differences in two days of training and preparation at Auxano’s Pastoral Succession Boot Camp in Phoenix, AZ. 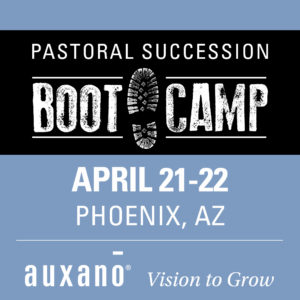 One hundred percent of all pastors stop pastoring at some point.

You can avoid the succession crisis in your church, and learn to use tools to help design your own succession.

Transportation, lodging, breakfast, and evening meals are NOT included.

The Pastoral Succession Boot Camp will be held at Mountain Park Church in Phoenix, AZ, from 9 a.m. to 4 p.m. on Tuesday and Wednesday, April 21-22.

The $1,995 investment includes registration for up to five members of your church team. Transportation to the host church, local lodging, breakfast, and evening meals are NOT included.

Join us at the Pastoral Succession Boot Camp for a collaborative learning environment that will help you design a succession plan centered on your vision and focused on the overall health and effectiveness of a leadership transition.

Bob Adams is Auxano's Vision Room Curator. His background includes over 23 years as an associate/executive pastor as well as 8 years as the Lead Consultant for a church design build company. He joined Auxano in 2012.